This blog is part of the series ‘SAP EWM meets Automation – Discover EWM MFS’ and gives you an introduction to the EWM PLC integration and the MFS component of EWM. In this context, we will look at the most important objects which are used to represent the physical material flow components in MFS. In addition to this I will explain on a high level how the MFS component integrates with the subsystem/PLC layer. Note that we will not look into the details of the communication between EWM and a subsystem as such. This will be part of additional post which I will release during the next months.

As an introduction, let us one more time have a look at the VDI 3962 layer model for computer installations in automated storage systems:

.
The Inventory Management level could be covered by an ERP system like SAP S/4HANA. EWM with its in-built MFS component covers the Warehouse Management and the MFC layer:

.
EWMs MFS components integrates with the PLC which in turn controls sensors and drives. Check this blog how to talk to girls on dating apps in case you want to learn more about what a PLC is and what it does.

.
Based on this focus, we can simplify our model to the following view:

.
EWM and MFS having the same color here as we are talking about one system. Still MFS can be viewed as a component within EWM, having its own objects which need to interlock with the components of core EWM. The term ‘subsystem’ along with a box in a different color represents the PLC and the hardware which is controlled by the PLC.

We start now with a simple example of a physical material flow which should help us find our way through the rather theoretical theory.

.
In EWM, the conveyor segments are created as storage bins and thus from EWM perspective this movement is nothing else than a warehouse task (+ warehouse order) from bin A to bin B:

.
WTs are communicated to PLCs if they are added to queues which are relevant for MFS (~ have the respective parameter for the operating environment and a PLC linked to it). That also means that the communication of warehouse tasks to the subsystems is invoked by the queue determination rules (customizing): 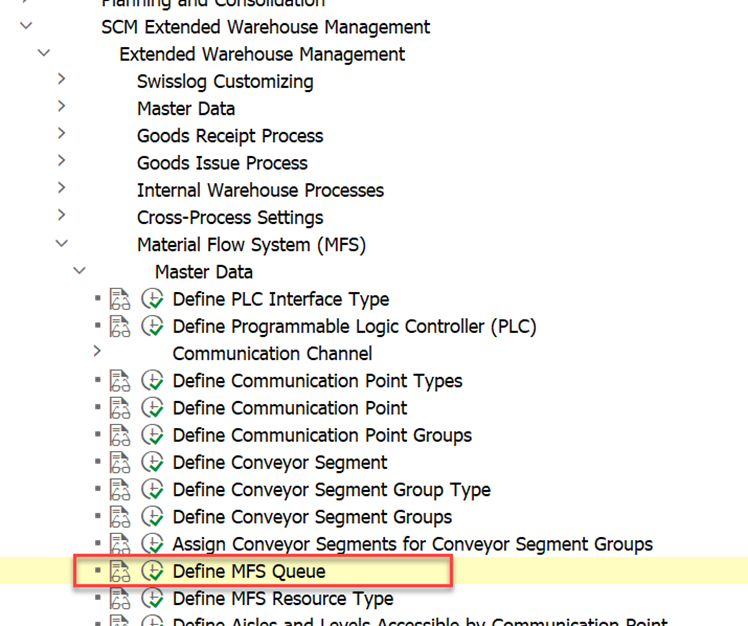 .
And as mentioned above, this is being set based on the queue configuration. FM /SCWM/QUEUE_DET_PREP reads the queue customizing from table /SCWM/T346:

.
Here you can see that it is empty in the ltap structure initially and then set to ‘Y’ (~ relevant but not sent to the subsystem yet):

.
So the customizing shown in the screenshots above tells us which PLC is the receiver of the telegram which is about to be created. So beside the queue itself, the PLC is next MFS object which is important for the interlock between EWM core, MFS and the subsystem: 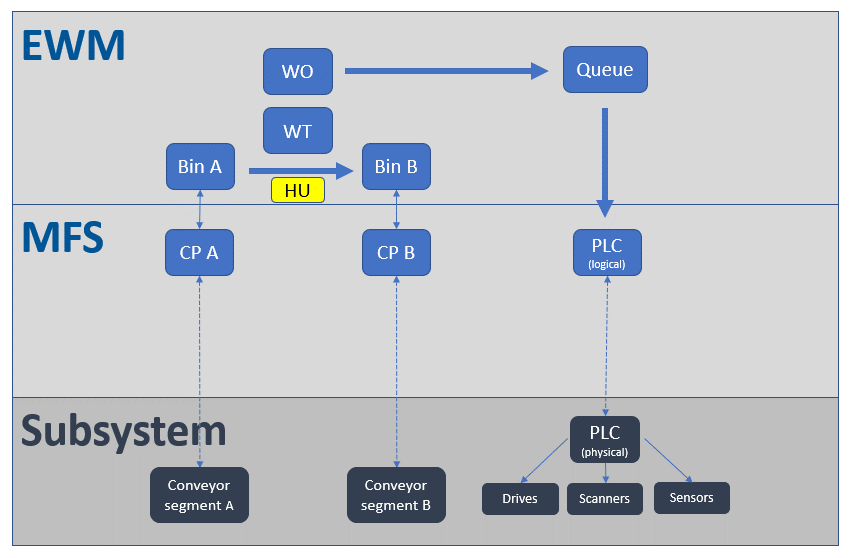 .
Application data and customizing for the PLC mainly define how EWM MFS communicates with the given PLC (e.g. APC vs. Plant Connectivity or structure of the telegrams) but also provides options to configure how EWM handles tasks which are assigned to the given PLC/queue (e.g. warehouse process types or exception codes):

.
The communication between the EWM MFS component and the physical PLC is done via telegrams: 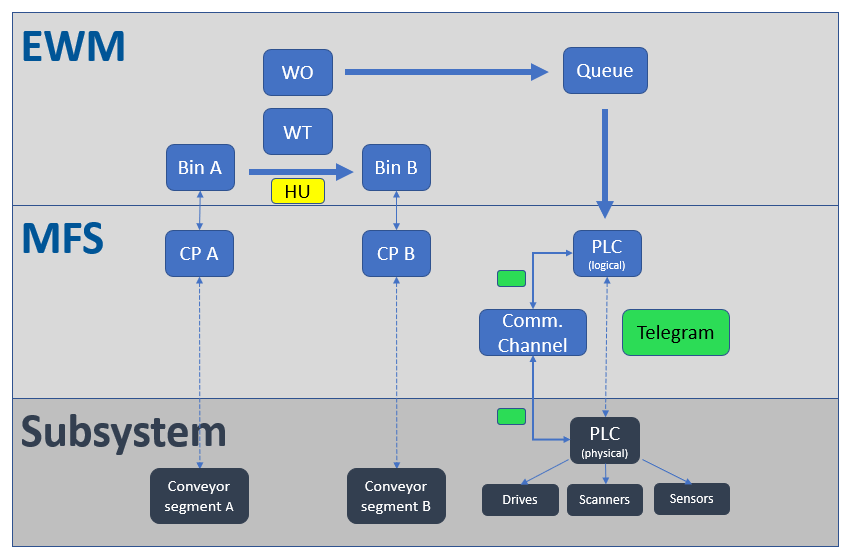 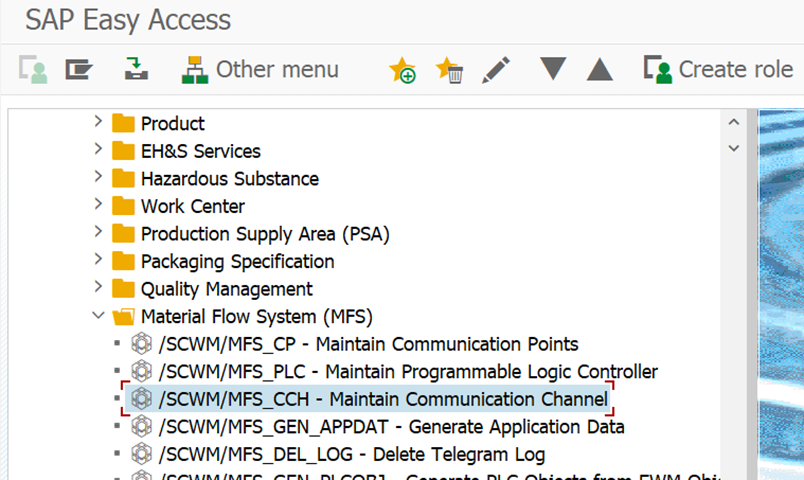 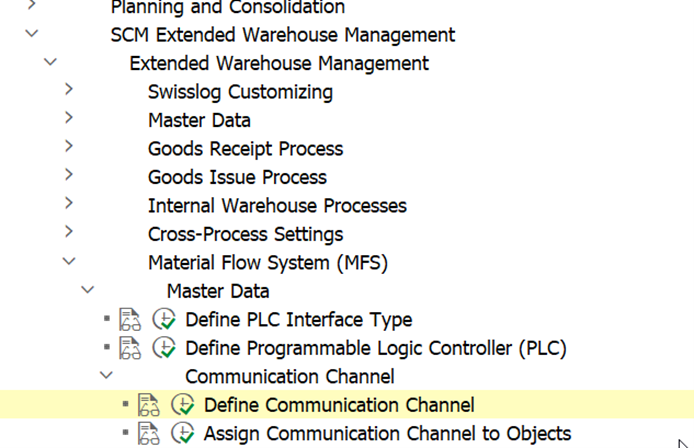 .
The resource is the last object which I would like to mention here as being relevant for the interlock. Resources become relevant in case we are not just dealing with a conveyor moving something from A to B but e.g. with a crane which is handling a pool of tasks. EWM is again using one of its core objects and adds MFS-specific configuration options (e.g. clearing bins which are assigned to a crane or whether a crane should execute interleaving or not): 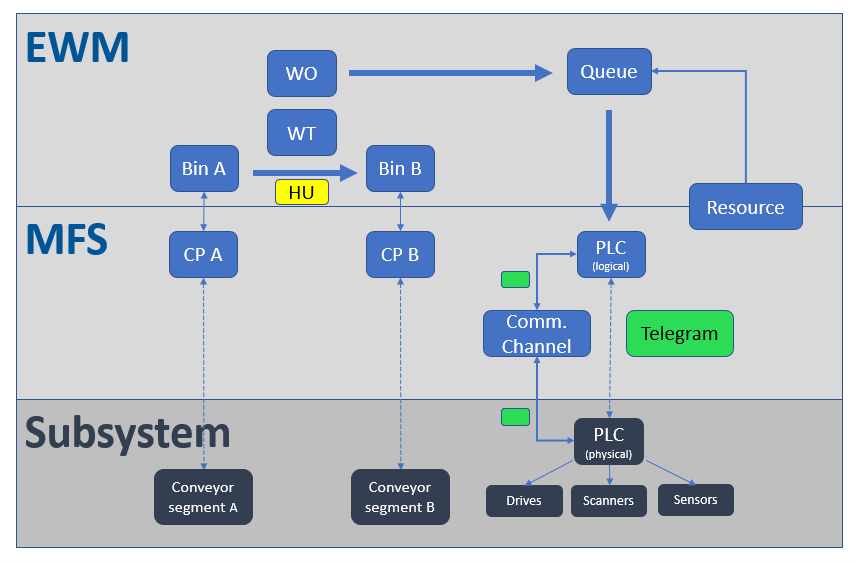 .
…that’s basically it. At least from my perspective, the important objects for the EWM-MFS integration.
To close this quick walkthrough I would like to come back to our example where the PLC now received the warehouse task in form of a telegram and triggers the conveyor drives in order to move the physical pallet from source to destination: 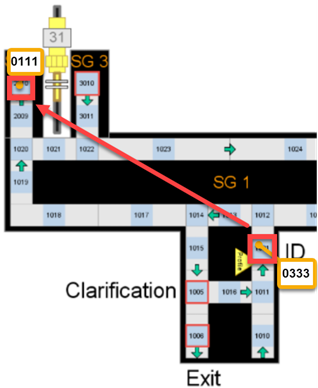 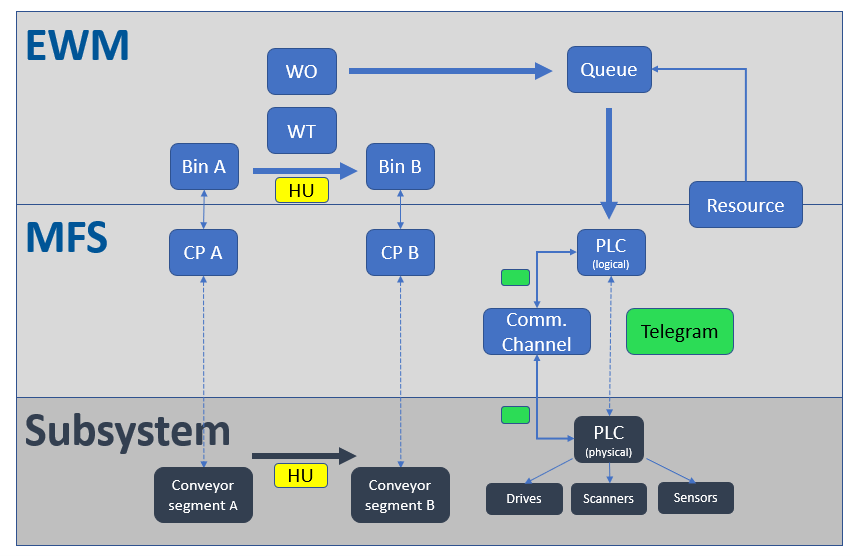 .
Summary
I hope you do feel a bit more comfortable now with the most important objects that EWM uses to integrate with its MFS component as well as with the subsystems (~ the actual hardware). Be aware that I skipped some details in order to avoid distraction and to highlight the important points. I might come back to the specialties and technical details as part of additional posts.

Before that happens, I will give you a step-by-step overview of the communication from EWM to the PLC and the other way around. I am working on this and will release the articles during the next months.

Register for my slack workspace or subscribe to my Youtube channel in case you do not want to miss those!